Mountain Waves is defined as oscillations to the lee side (downwind) of high ground resulting from the disturbance in the horizontal air flow caused by the high ground.

The wavelength and amplitude of the oscillations depends on many factors including the height of the high ground relative to surrounding terrain, the wind speed and the instability of the atmosphere.

Formation of mountain waves can occur in the following conditions:

Vertical currents within the oscillations can reach 2,000 ft/min. The combination of these strong vertical currents and surface friction may cause rotors [1] to form beneath the mountain waves causing severe turbulence. 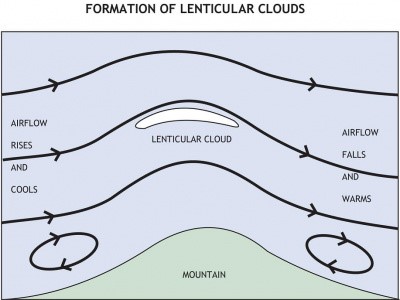 Windward of the mountains IMC conditions may likely be present, whereas due to the “Foehn Effect” VMC conditions are generally expected to the leeward.

An aircraft tracking perpendicularly across, or downwind of, a mountain range or a significant mountain ridge experiences a sudden loss of altitude followed by a significant and sudden reduction in airspeed during severe turbulence. Regaining the desired flght path may be difficult, for a relatively short period, until the wave is exited.