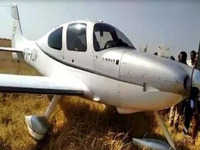 TIRUPATI: A four-seater chartered aircraft on its way to Bengaluru from Bellary made an emergency landing in Anantapur district on Monday morning.

According to Kalyandurg rural police inspector Suresh Babu, single-engine aircraft Cirrus SR 22 (VT-VDN), carrying two people from Jindal Steel Limited to Bengaluru, made an emergency landing in a farmland at Eradikera village in Brahmasamudram mandal at around 9.30am.

The aircraft, which took off from Bellary, reportedly suffered a technical snag in its fuel supply, forcing the pilots to make an emergency landing near Karnataka border. Police personnel from Kalyandurg were rushed to the spot to take stock of the situation.

Curious onlookers from nearby villagers too queued up at the spot to see the aircraft.

The Cirrus SR 22 (VT-VDN) aircraft with 310 HP engine is equipped with the Cirrus Airframe Parachute System (CAPS), which can lower the aircraft to the ground gently in case of an emergency.